What Else Did We Discover In and Around Arco?

As we entered Arco's downtown district (Hwy 26), we saw an interesting roadside display that has become known as the "submarine in the desert".  It's the conning tower from the fast-attack nuclear submarine USS Hawksbill. It was brought to Arco in 2003 to signify the community's support for the armed forces as well as to show the town's unique history with nuclear energy. 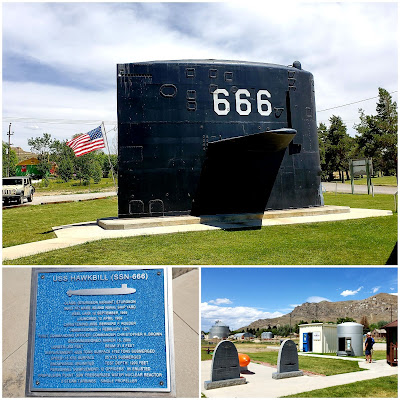 Arco was also the first town to temporarily to use, in 1955, nuclear peacetime-produced electricity (the electricity actually came from a separate plant that shut down later in 1956).  EBR-1 is an acronym for Experimental Breeder Reactor #1.  On December 20, 1951, 4 electric light bulbs were first lit using nuclear fission to power steam turbines that generated electricity.  (Sounds so simple..but was it not!) We discovered much about how nuclear energy is produced from this very informative Visitor Center.  Located about 15 miles east of town on Hwy 26, EBR-1 is not far off the road and easy to see. 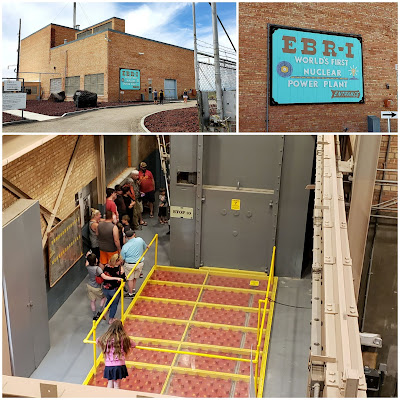 The Self-Guided tour was perfect for us. We could take our time and sort of internalize (meaning read and re-read) the complicated steps of how nuclear fission happens and the process of how the electricity is then produced.

Photo on the left is the very important SCRAM switch.  It stands for Safety Control Rod Axe Man.  Hitting this button stops the nuclear reaction.  The photo on the right is of the actual reactor.  Of course all of the necessary parts inside have been removed and it is very safe for the public to view. 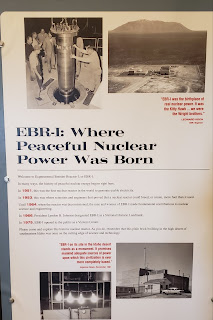 Photo on the right is from an information board about how peaceful nuclear energy was born.  You can see a photo of the 4 light bulbs lit from nuclear power in the lower left of the poster.  The actual 4 bulbs were on display in the museum.  Photo on the right is 'hand-signatured' evidence of the actual event.  Engineers on site that day wrote their names in chalk on the wall to commemorate the event.  A sheet of glass hangs over their names to protect their signatures.

I probably should have taken more photographs but I was too busy trying to comprehend and understand the complex steps of this process.  EBR-1 was decommissioned in 1964.  Soon, EBR-2 was built in 1964 and it produced nuclear electricity until 1994.
Located about 5 miles from the EBR-1 is the 900 square mile Idaho National Laboratory. Closed to the public, this isolated site is a major center for national security technology development and demonstration.  There is a lot of history here too.  Initially it began as an artillery test range in the 1940's and it was also used for performing maintenance on the Navy's high powered turreted guns.  Even the prototype reactor for the world's first nuclear-powered submarine, the USS Nautilus was made here as well as training of many of the nation's nuclear submarine operators. 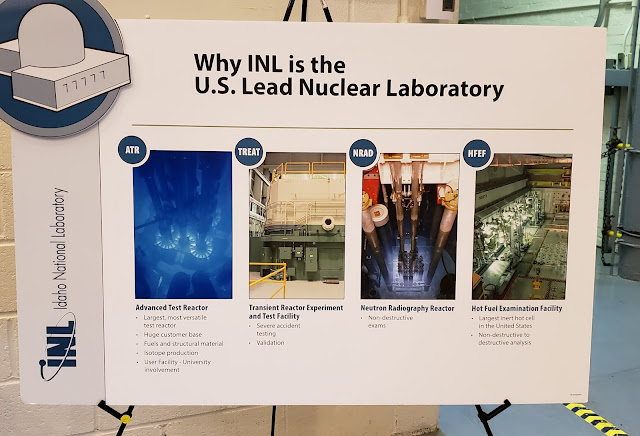 Just outside of Arco we finally got to see evidence of the Oregon Trail.  White trail markers indicate this road where the Emigrants headed westward in search of fertile ground to start a new way of life.  This section of the Oregon Trail, called the Goodale's Cutoff, travels around Arco and skirts the Craters of the Moon Monument.  Originally an old Indian and fur trading trail, this section was discovered to be a somewhat safer section.  At a total length of 230 miles, it avoided a part of the original Oregon Trail that came to be known for Indian attacks.  Around 1862, the Goodale's Cutoff became more widely traveled due to its safety.  To learn more about Goodale's Cutoff, click this link
HERE.

The Oregon Trail's Goodale's Cutoff skirted the lava beds of Craters of the Moon, just too rocky to go through there.  It moves towards this small naturally occurring body of water called Lava Lake.  Can you imagine how thankful the Emigrants were for this water after traveling in this rocky, dry land?

My mind cannot help but to somehow try to comprehend how happy those weary travelers must have been to find this amount of water for themselves and their animals. 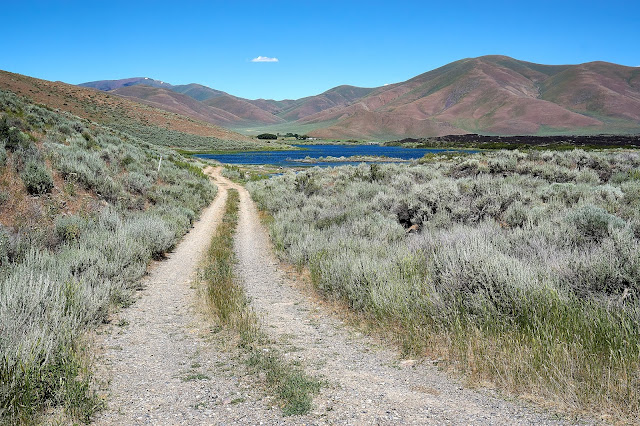 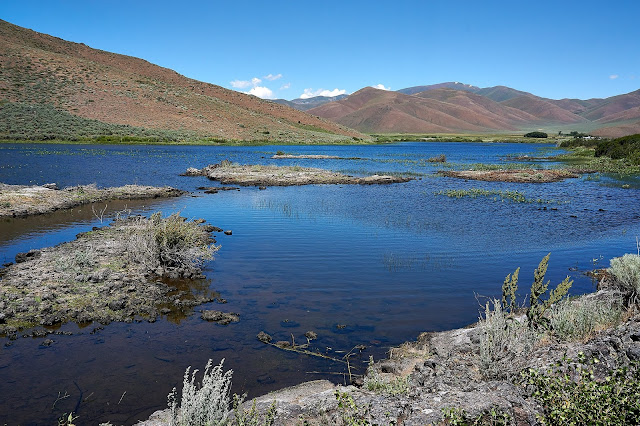 Next, we discovered Mackay Reservoir.  Located northward on Hwy 93, the views of the Lost River Mountain Range were impressive.

The small community of Mackay has a rich mining history too.  We found out from a local resident there was an old mine, with signage, good for exploring.  You can see Mackay in the valley below. 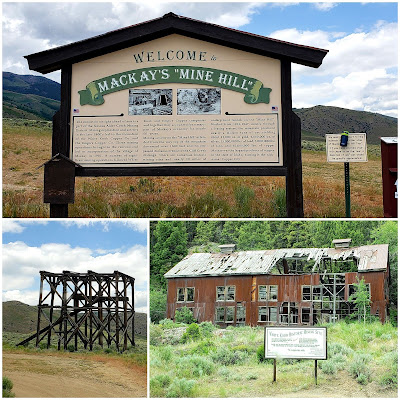 Copper was the mineral the miners were after.  Still standing, they built several of these cable towers to bring the ore down to the smelter. 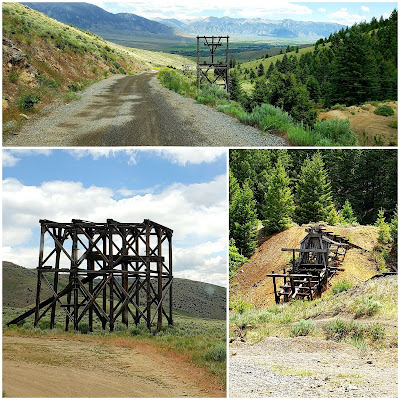 Unfortunately, the last section of road to the top aerial tramway loading station was closed.  So we turned around and were amazed by the Lost River Mountain Range views!  Some of these peaks are over 12,000ft.

We enjoyed the old mining smelter site, partially restored for visitors to learn how the mine operated.  The Mackay mine was one of the largest mines in Idaho digging over 1 million tons of ore..some gold, copper and silver. 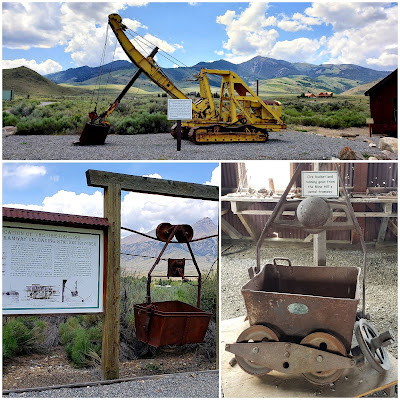 We found a great display of old mining equipment. 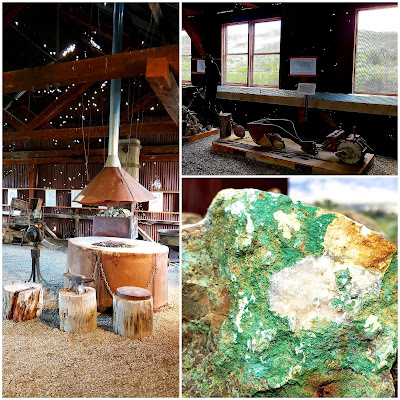 In the Shay Railroad House, we found this old 1928 GMC truck.

We found so much to see and enjoy in Arco, Idaho.  The most pleasant surprise were the delicious, 'so tender the meat just fell off the bone' smoked ribs and very tasty smoked potato all served from Mountain View RV Park's Cafe.
So very, very yummy.

More Later from the Missoula, Montana area.
Posted by Ron and Cynthia at 8:38 AM

Ron and Cynthia
We have begun a 'new chapter' in our lives as full-time RVers. We have enjoyed camping and traveling since we first met over 40 years ago. Our new lifestyle of traveling throughout this beautiful country is what we have dreamed and hoped for in our retirement.