On our last day trip into Yellowstone National Park our destination was the southern West Thumb Geyser Basin, Yellowstone Lake and a drive through Hayden Valley. 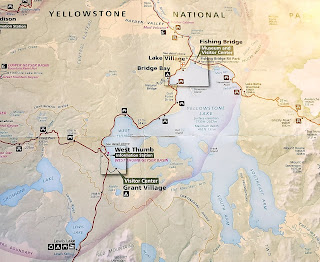 The West Thumb Geyser Basin, located on the western banks of Yellowstone Lake, is actually a volcanic caldera within a caldera.  It is estimated that about about 174,000 years ago a powerful volcanic eruption occurred here.  When the earth's crust collapsed, the depression later filled with water creating Yellowstone Lake and the many hot spots.  We enjoyed a beautiful day strolling the boardwalks as they meandered around hot springs, smaller erupting geysers and a clear blue Yellowstone Lake.   There are a number of hot springs in the photo below, of course each one has a specific name.

The water run off is cooler so the microbial mats are flourishing.

Black Pool Hot Springs
Given this name many years ago, it doesn't fit any more but the Park has still kept that name.  The color changed in 1991 from black to aquamarine because the water temperature got hotter and killed the special cyanobacteria living in it. 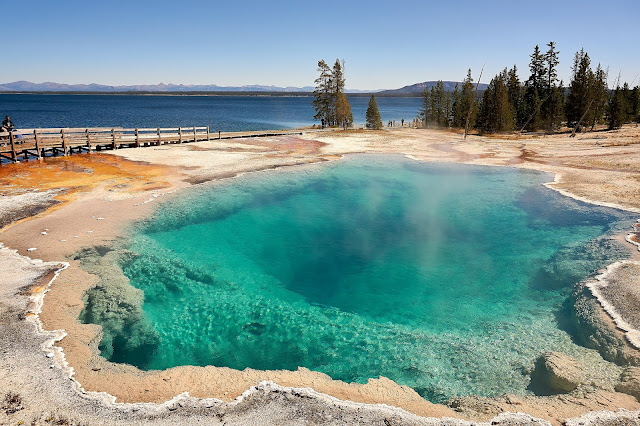 The combination of a blue lake, whiteish ground and a boardwalk almost felt like a stroll at the beach. 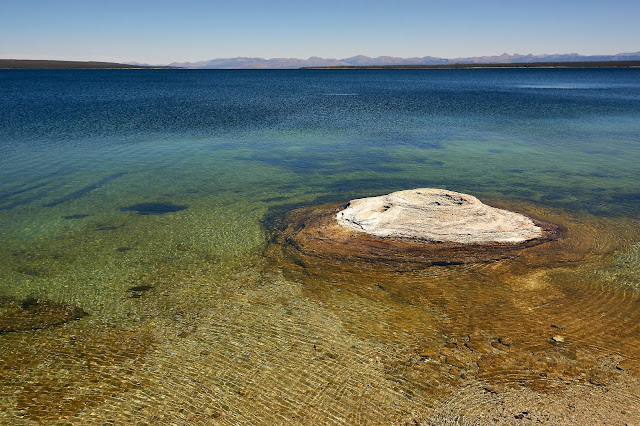 Lake Shore Geyser
These geysers are underwater in the spring.  They haven't erupted since 2003 but today we saw them boiling. 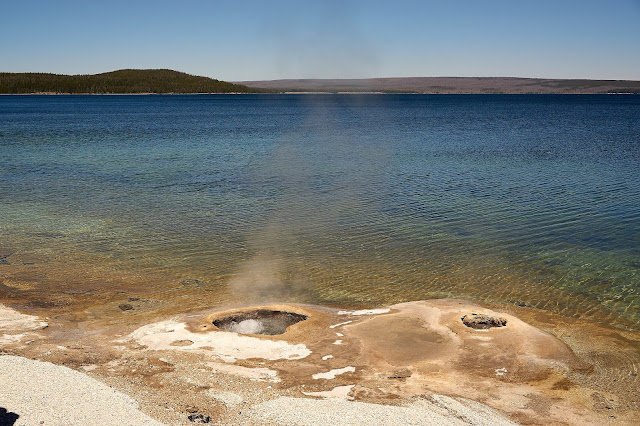 Beautiful clear, blue water with mountain views in the distance.  Interestingly, there are hundreds of hydrothermal vents, craters and fissures under the water in Yellowstone Lake. 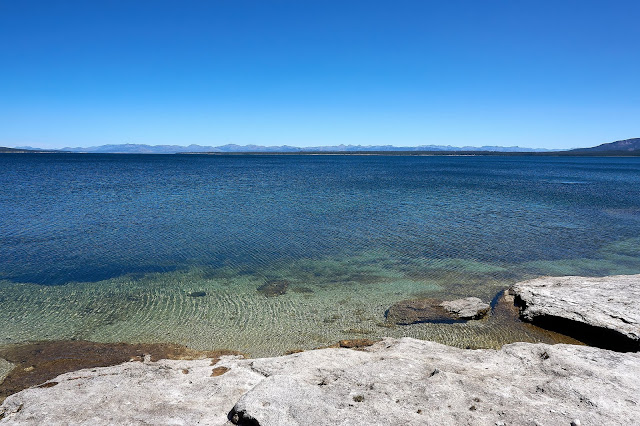 Fishing Cone Hot Spring
Mountain men legends described this hot spring as a pot of boiling water where you could catch a trout then swing it over into the hot water and cook your fish while it was still on the hook. 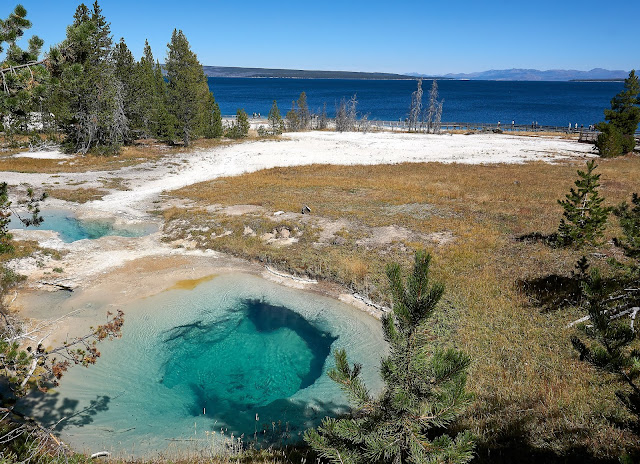 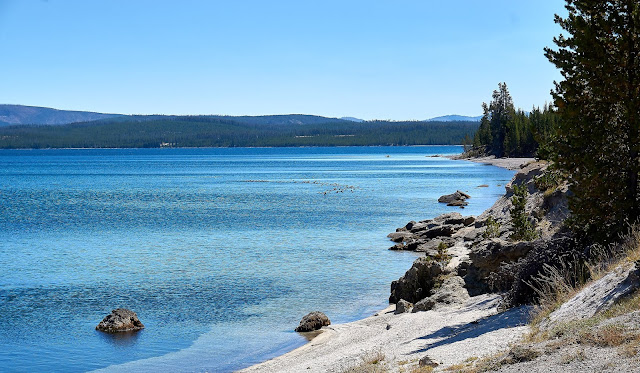 Once we left the West Thumb area, we noticed the burned forest along the edge of Yellowstone Lake.

Afternoon winds had increased and the Lake became quite choppy.

This view is from the Fishing Bridge section of Yellowstone National Park.  The full hookup campground, roads and full service areas here are all undergoing extensive renovations now.  We pulled in for a minute to check out the Gift Shop but purchased nothing and continued northward on the main Park road.

We stopped at the LeHardy Rapids.  When we were here 29 years ago we could see the trout jumping the rapids to swim up stream to spawn.  We didn't see any trout today because it's after their spawning run. 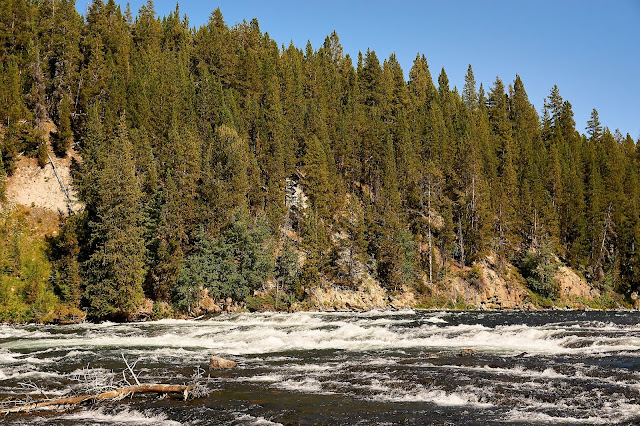 Research has shown that these rapids have risen over the past 40 years indicating the volcanic activity occurring underground.  To read more about the US Geological Survey's discovery, click HERE. 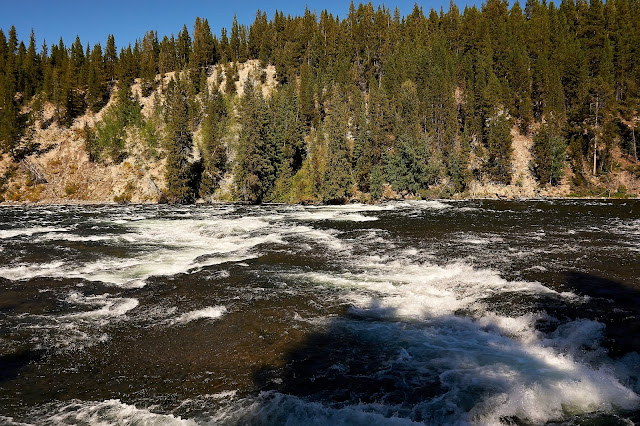 One of our last stops in Yellowstone is the Mud Volcano thermal area.  This place really smelled!  That's because of the hydrogen sulfide gas being emitted from the many hot pools and fumaroles in the area.  The boardwalk safely took us by the Dragon's Mouth Spring.  Hot steam bellows and roars out continuously. 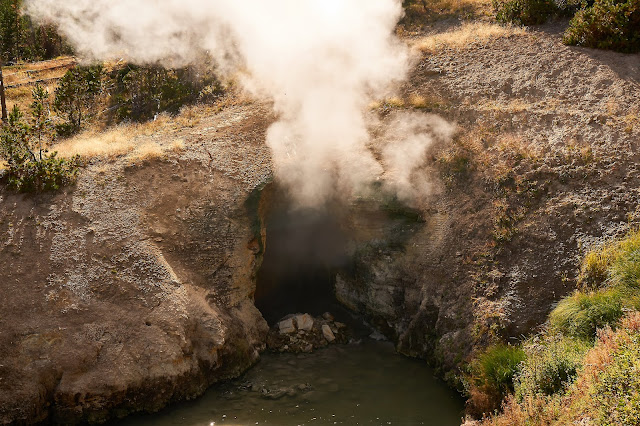 This was a unique experience.  Listening to the roar of the steam, seeing bison all around and with the rotten egg smell we just knew we were in an active area.  In fact more small earthquakes happen here than other areas in Yellowstone.   Several faults converge in this section therefore scientists are always monitoring this active area.

The Dragon's Mouth Spring has dropped 10 degrees in temperature since 1999.  The water run off exhibited a green microbial mat. 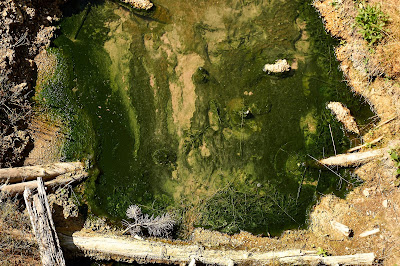 This unusual hot spring is called the Mud Volcano.  It was constantly bubbling, boiling and steaming the entire time we were there.  It had a bad odor and a few people covered their faces when they walked by because of the hydrogen sulfide gas coming from it. 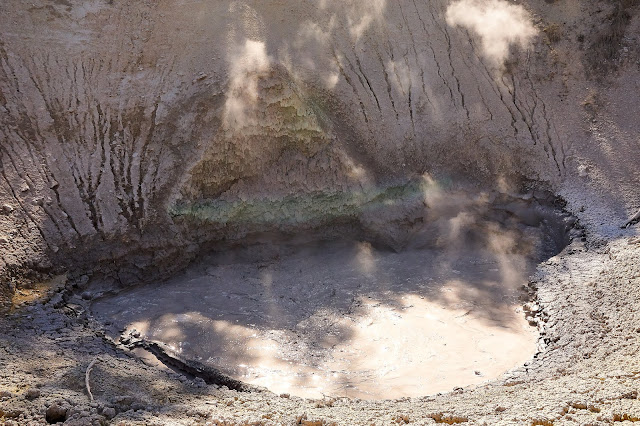 How was this bison was able to lay so close to the Mud Volcano???

The animal never moved in spite of the hot steam gases, hot sun and all of the tourists taking its picture. 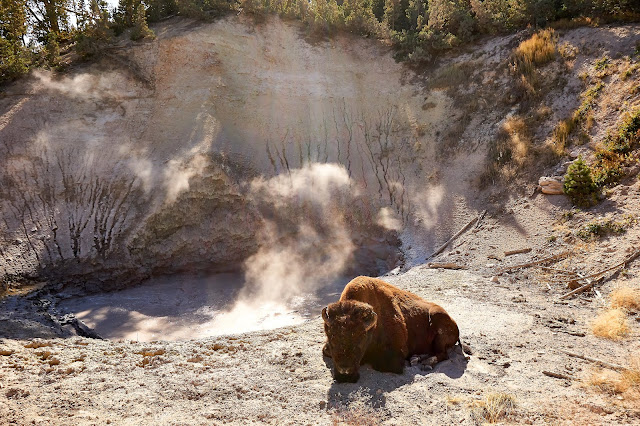 When the Mud Volcano was first discovered in 1870, it had a tall cone from which the mud would erupt and also shake the ground.  It blew apart in 1872 leaving this hot caldron of steaming, boiling muddy water. 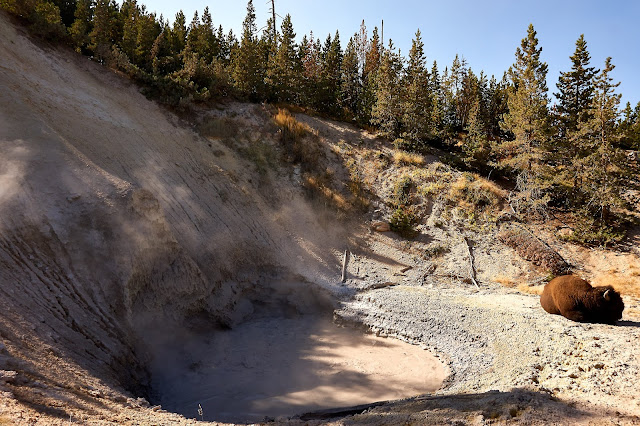 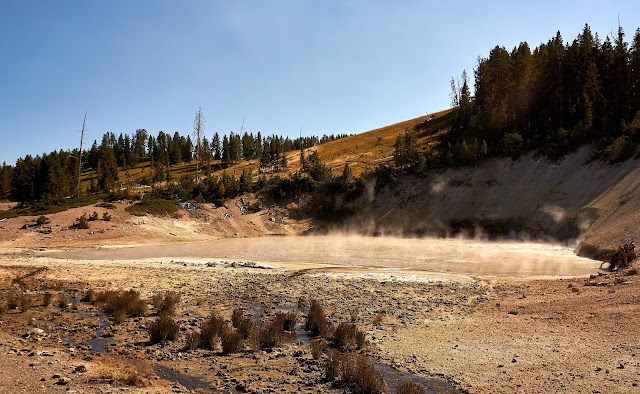 Across the road, we saw more bison relaxing along the Yellowstone River. 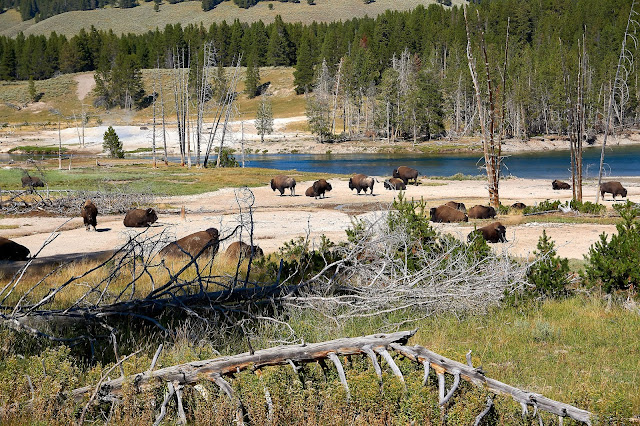 As we continued our drive northward on the main Park road, we entered the Hayden Valley area.  This is where we had heard all of the bison were located.  The news was right, we saw many here. 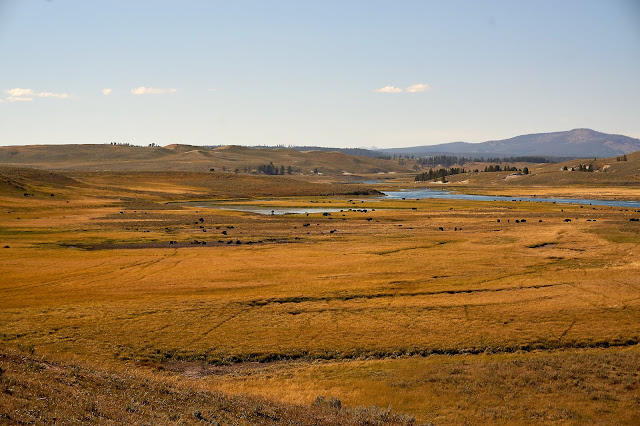 Yellowstone is the only place in the United States where bison have lived continuously since prehistoric times. 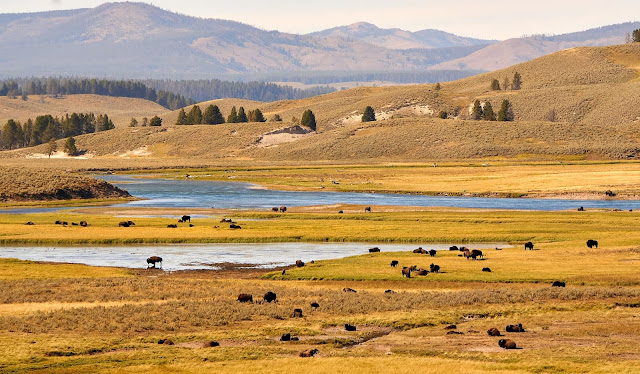 There are two herds of bison in Yellowstone National Park.  This group is called the central herd of Hayden Valley. 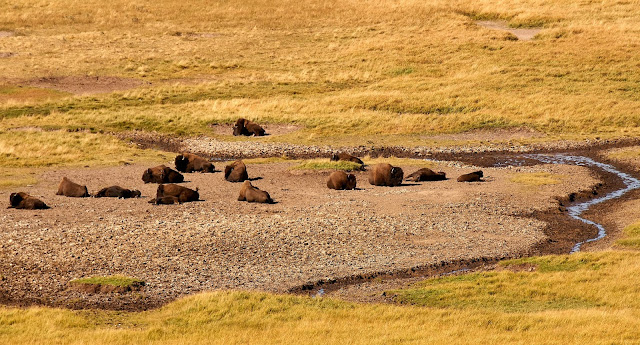 This bison was close to a pull out when we drove by.  We didn't stop but Ronnie drove by it slowly so I could make this photograph using a telephoto lens. 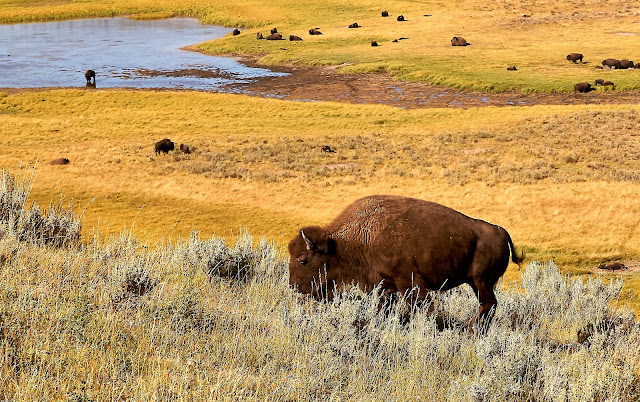 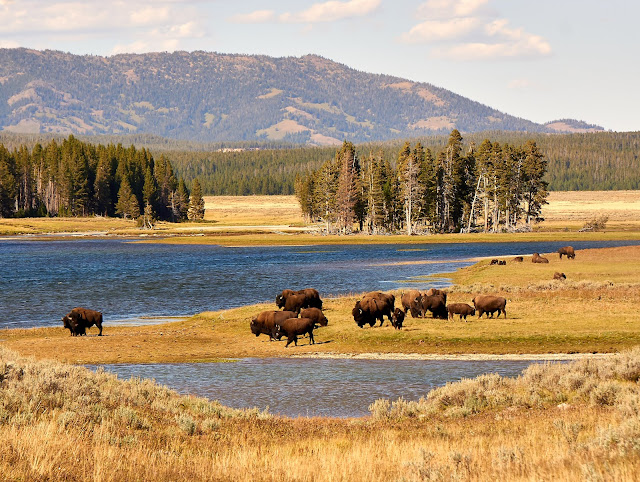 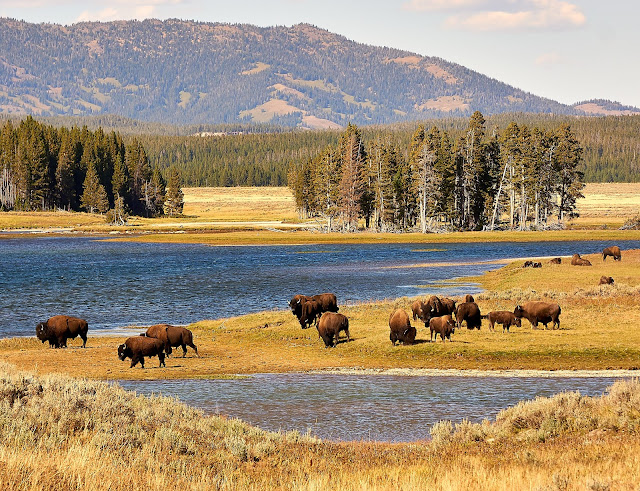 A little farther up the road at a safer pull out, we stopped and enjoyed the pastoral scene. 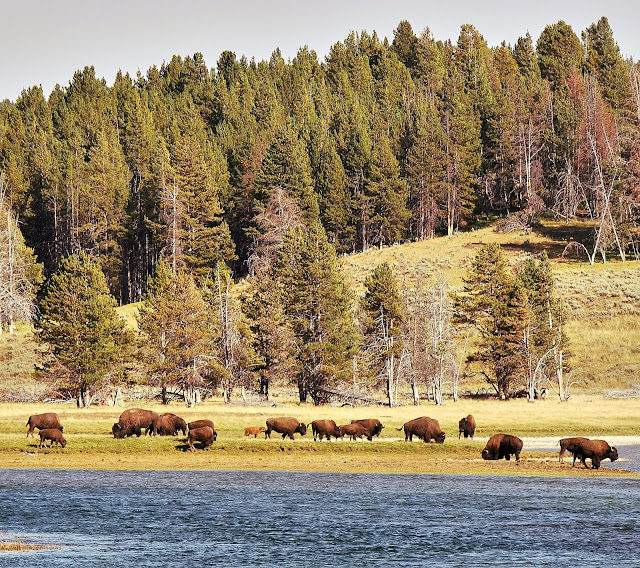 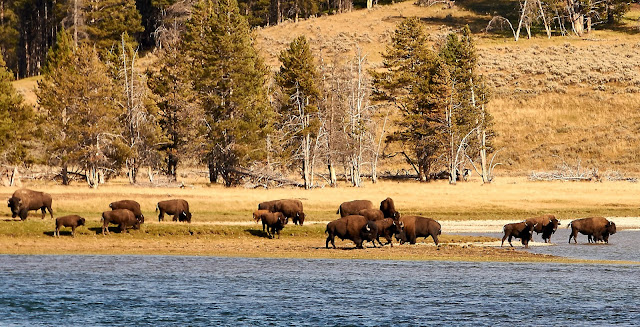 We're glad we missed this big fellow!  We can now see how the "bison traffic jams" occur.  You cannot go anywhere until that huge animal walks off the highway. 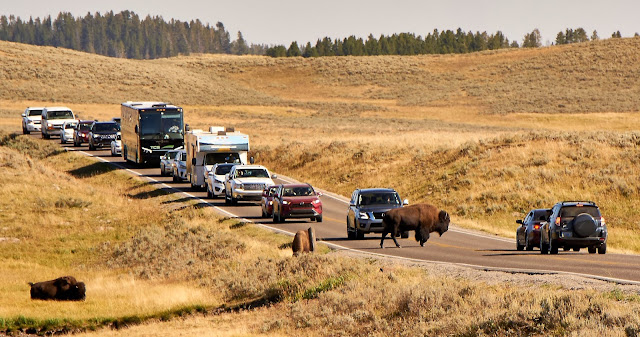 We really loved our visit here and could certainly stay longer but it's time to Eas-on Down The Road. So long Yellowstone, thanks for the wonderful memories.

Ron and Cynthia
We have begun a 'new chapter' in our lives as full-time RVers. We have enjoyed camping and traveling since we first met over 40 years ago. Our new lifestyle of traveling throughout this beautiful country is what we have dreamed and hoped for in our retirement.